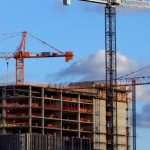 We all know construction work is tough, dangerous work. Since even before the dawn of the industrial revolution, when steel manufacturing took-off and the quintessential I-beam-laden construction site was born, builders were exposed to inherent danger.

Thankfully since the 19th century, we have seen the advent of the hardhat, noise protection and safety harnesses. Interestingly, before the introduction of the hard hat, dock workers used to cover their regular hats in tar and let it harden to protect from falling debris so common in that field of work. Regardless, workers still face insurmountable risk on a daily basis.

The Figures
Regardless of all the technology safety and measures the construction industry has evolved to strictly implement and enforce, there are still serious risk factors at play to the typical worker. According to the Occupational Safety & Health Administration (OSHA), in 2013 falls accounted for 36.9% of all construction jobsite deaths. Meanwhile, being struck by a falling object was the reason for 10.3% of jobsite deaths and electrocutions were behind 8.9% of fatalities. Workers getting caught in or between machinery components or vehicles caused 2.6% of construction jobsite deaths.

Great Heights
Skyscraper construction, which technically started in the 19th century, was the catalyst to the invention of the safety harness. Not fully implemented and regulated until the mid-20th century, as safety measure, the harness reinforced the safety net, which wasn’t used on construction sites until the 1930’s, the height of the 20th century construction boom. One wrong step doesn’t mean instant demise the way it did 90 years ago, thanks to advances in safety such as these, but a fall still can mean a broken bone or a sprain.

Passing Cars/Falling Debris
Falling debris and tools along with swinging I-beams are commonplace at a typical jobsite. Even relatively light contact with a solid steel girder can mean severe head trauma. Moreover, the velocity from a falling wrench can max at 40 meters per second. This is why hardhats are more than just a protective shielding; they actually absorb shock. The two-part design creates a separation between the protective, rigid plastic and the wearer’s head, eliminating direct impact.

A construction worker assigned to a highway project is obviously at more risk than someone working on a single story renovation. This is because their safety is somewhat in the hands of passing drivers on the road, which could possibly number in the thousands on a given day. One negligent driver looking down to text or change the radio station could cost a tar-slinger their life. Fortunately such equipment as mobile impact attenuators were created to absorb impact from collision and help prevent potentially lethal roadside accidents.

Electrocution
Though not a very prevalent or common means of casualty or fatality on jobsites these days, electrocution is a very serious risk workers can face. The most common reason for this type of incident is more likely to happen on renovations or reconstructs, where old, faulty wiring or hardware is more likely to shock. Less common are reasons of faulty equipment or live wires not having been properly been grounded. This is why workers potentially exposed to any kind of electricity on their day-to-day should always remember properly insulated rubber gloves and properly insulated runner boots.

Weather
The degree of risk a worker is faced with obviously depends greatly on the elements Mother Nature throws at them. The very definition of a construction worker is anyone in an occupation that involves possible head strikes, heatstroke, frostbite and other weather elements. Though not typically a cause of death, weather conditions are a central element to their job description, which can easily cause frostbite and heatstroke. But a worker on a tower in windy downtown Chicago in the dead of winter, for example, is faced with a great risk slipping and falling from ice buildup as well.

Construction and refractory work forever will be trying, dangerous work. Jobsites have gotten progressively safer over the past 30-40 years thanks to advances in safety technology designed to better protect workers. Regardless, every person involved with or visiting a construction site should equip themselves as thoroughly as possible with industry regulated safety equipment.

« Staying Safe on Site
The Ever Changing Construction Industry »
Menu